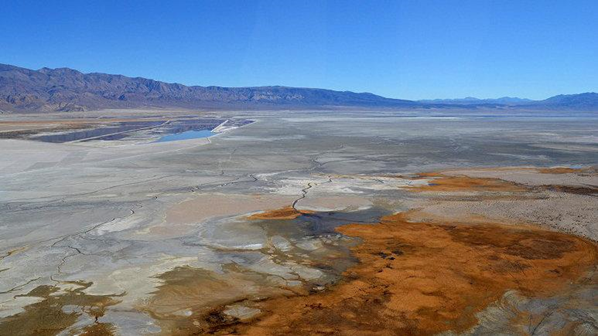 North American playas are large dust emitters. Dotting the deserts of the Southwestern United States, these dry lake beds are highly saline from the concentration of salts following evaporation. These salt deposits can become entrained in the air when winds scour the dried lakebed. The resulting saline dust has a high fraction of halogenated compounds, primarily those containing chlorine. When the chlorine-containing aerosols (the dust that remains suspended in the atmosphere) mix with nitrogen oxides (primarily dinitrogen pentoxide), a gas called nitryl chloride (ClNO2) is produced. Sunlight interacts with  ClNO2, breaking it apart into chlorine radicals that participate in the formation of tropospheric ozone.

A recent study published in Environmental Science & Technology analyzed dust samples collected at seven saline playas from the deserts of California, Nevada, New Mexico, Utah, and Texas. Using mechanical agitation to generate aerosols from the playa sediment, the researchers (Mitroo et al.) were then able to expose these aerosols to dinitrogen pentoxide to demonstrate the formation of ClNO2.  This study provides the first evidence of the contribution of playas and playa dust to the generation of chlorine radicals in the atmosphere. The authors suggest that the CMAQ (Community Multi-scale Air Quality) model be updated to reflect playas as a significant source of ClNO2, improving the accuracy of the model specifically with respect to ozone formation. Presently, the model’s ClNO2 sources include coal plants, burning of biomass, and sea salt spray in coastal regions.

The complex composition of sediment in playas such as the Salton Sea and Owens Lake makes the effect of these sources on the global chlorine budget hard to characterize. Recent studies have confirmed higher levels of inland ClNO2 than could be explained by the currently characterized sources in CMAQ, leading to this inquiry of playas as a potential source of ClNO2 production. These findings have drawn attention to playa emissions given that global playa coverage is expected to increase in the next 50 to 100 years due to drought and desertification. With dust emissions anticipated to increase globally with current land- and water-use practices, Air Sciences Inc. continues its work in dust monitoring and mitigation. Past and present projects include work at Owens Lake and the Salton Sea. Learn more about our work on dust mitigation and assessment here.