Wildfires are growing in intensity and frequency as the climate changes, draining resources for firefighting often early in the season. Traditional methods of fire towers or satellite imaging are not effective until  fires are of substantial size. Air Sciences intern Mikhail Mayers, a computer engineering student at Portland State University, is working with some other students to detect smaller fires sooner. 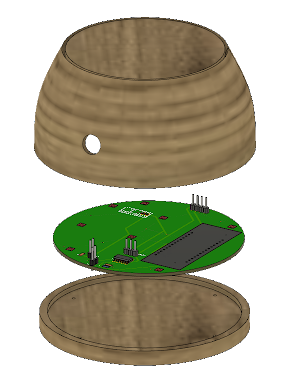 About 10 cm in diameter, the unobtrusive housing can accommodate multiple sensors for wildfire detection or other applications.

Mikhail’s team is developing an answer to these challenges: low-cost, wholly autonomous “smart” wildfire sensors for remote areas. About the size of a brown baseball, the sensor housing is mounted to a tree and deployed at a density of four units per acre. Solar power and an LTE cellular connection to an Amazon Web Services (AWS) server help deliver the data from remote areas to stakeholders. In cases where cellular coverage is spotty, integrated mesh networking lets the units bounce signals off one another until a cellular signal is available.

A number of sensors can be integrated, but right now the team is using sensors to detect temperature, ultra-low frequencies of light emitted by wildfire, and high concentrations of volatile organic compounds. Mikhail works primarily on the hardware, but one team member is a large data programmer with the vision of feeding data into a machine learning algorithm to detect patterns. Patent pending!

For information about the team and the InventOR Collegiate Challenge (their segment starts at 5:15): https://www.opb.org/radio/programs/thinkoutloud/segment
/moda-at-the-supreme-court-inventions-pianos/