The Regional Haze Rule, Part I

The IMPROVE (Interagency Monitoring of Protected Visual Environments) network, established to monitor haze-producing aerosols and other particulates, was expanded and serves as the basis for measuring progress under the rule. As haze is often regional, the reasoning was: addressing the issue in the vast Class I areas would in turn improve air quality in the surrounding areas since the precursors to haze are often emitted in urban areas hundreds (even thousands) of miles away.

The goal of the Regional Haze Rule is no impairment to visibility in Class I areas caused by human activity (anthropogenic) by 2064. The projected progress to be made by 2064 (in EPA jargon: the uniform rate of progress glidepath) includes checkpoints for intermediate goals in 2018 and 2028. The overall intent is to restore Class I areas to “natural” conditions.

The term “natural” is contentious in itself. The benchmarks for such were based on peer-reviewed work done in the 1980s, which in turn used data collected from the 1950s to the 1970s. Consider for a moment the different pollutant mix of that era. There were fewer fires, less international transport yet much more industrial and mobile source pollution. Not only is the pollutant mix different now, we are also facing the impacts of climate change and a larger population. Census figures indicate that the U.S. population has more than doubled over the last 50 to 70 years, from 151 million (in 1950) to 309 million (in 2010).

The original EPA guidance tracked progress using values from the IMPROVE stations sited in Class I areas throughout the country. Once every three days, air is pulled through a filter for 24 hours. Filters are later retrieved and analyzed to apportion the mass by particle type: organic and elemental carbon, sea salt, coarse mass and soil, nitrate, and sulfate. 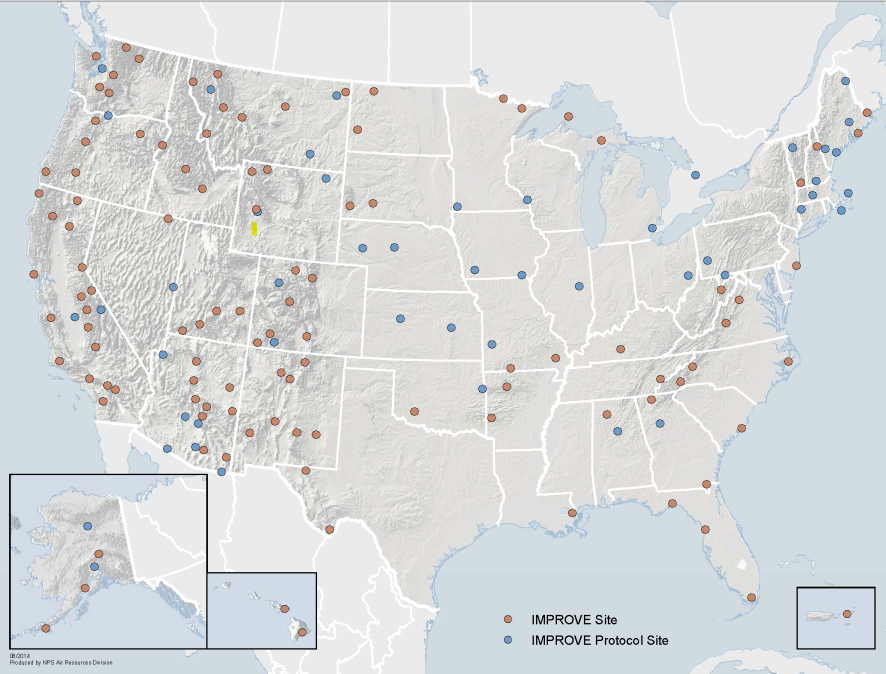 IMPROVE monitoring sites in the United States, reproduced with permission by the U.S. National Park Service.

These particle types act as tracers for major sources of pollution (e.g. transportation, wind-blown dust, wildfires). Total mass on each filter is then ranked at each site, and the highest 20% are used as the targets for reductions. Within those highest days, the apportioned mass provides insight to air quality planners for targeting the sources of pollution.

In 2016, the EPA drafted new guidance and proposed a new tracking metric that attempted to remove the influence of wildfire by eliminating organic carbon and light-absorbing elemental carbon contributions above the 95th percentile. For many IMPROVE sites in the Western United States, the “worst” days according to the old method (ranked by order) were dominated by organic and elemental carbon, often attributed to wildfires, which are not considered reasonably controllable sources. In general, the new method shifts the “targeted” reductions away from these regional, summertime, fire-affected days to days in the months spanning November to May that reflect more local effects.

A recent paper by Brewer et al. examined the performance of this new metric.

The researchers compared the natural and anthropogenic contributions to haze in the Western United States in 2011 estimated using the EPA-recommended method and using model projections from two methods that will be used by states to demonstrate visibility progress by 2028 (the Comprehensive Air Quality Model with Extensions (CAMx) and the Particulate Source Apportionment Tool (PSAT)).

The EPA method assumes that occasional (episodic) elevated carbonaceous aerosols exceeding an annual 95th percentile threshold are natural events. For the Western United States IMPROVE monitoring sites reviewed in this paper, CAMx-PSAT confirms these episodes are impacted by carbon from wildfire or prescribed fire events. The researchers arrived at two conclusions for the IMPROVE sites in the West:

However, the paper also revealed that low-level, persistent organic carbon signals from fires can contribute to impacts, especially in areas with active prescribed burning programs.

The new EPA guidance acknowledges that the use of prescribed fire as a land management tool is likely to increase in some areas in the future, and leaves the door open for states to propose ways to account for and remove prescribed fire impacts when demonstrating progress by 2028. To accomplish this, grasping the timing and magnitude of impacts of fires, both wildfire and prescribed, is essential.  We will explore this in our next post about the characterization of wildfire in regional haze planning.