In our previous post on the Regional Haze Rule (RHR), we briefly explored the history of the rule and how recent changes in the rules and accompanying guidance have implications for how wildland fires are handled during the planning process. Here, we will look more closely at the implications of wildland fire on regional haze planning, and how Air Sciences is assisting the Western Regional Air Partnership (WRAP). WRAP is a voluntary partnership of states, tribes, federal land managers, local air agencies and the U.S. Environmental Protection Agency (EPA) whose purpose is to understand current and evolving regional air quality issues in the Western United States. 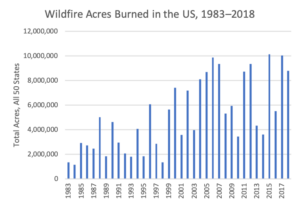 In accordance with the RHR, states must submit updates to their State Implementation Plans (SIPs) by July 2021 that will include air pollution emissions reduction benefits expressed as “reasonable progress goals” (RPGs) for visibility projected out to 2028. As mentioned in Part I of this series, new guidance from EPA will remove contributions from episodic events with large amounts of organic carbon, often associated with wildfires. This will ostensibly allow states to focus on other controllable, anthropogenic sources of haze for establishing RPGs.

Reductions in fire emissions will not be included in the RPGs. Nevertheless, we need to understand how this source contributes to haze, as organic carbon, sulfate, and/or nitrate, on days not screened out using EPA’s organic carbon metric (eliminating contributions above the 95th percentile). This is especially important both from the evidence that the prevalence of wildfire is increasing (see figure) and the desire among federal land managers to increase the use of prescribed burning and wildland fire use.

Setting RPGs is accomplished by performing regional photochemical grid modeling (PGM). Large-scale air quality models, PGMs simulate the changes of pollutant concentrations in the atmosphere using a set of mathematical equations characterizing the chemical and physical processes in the atmosphere. PGM is used on all emissions, including fires, for the current or “representative baseline” period, and for the 2028 future conditions.

PGMs estimate concentrations of air pollutants on an hourly basis for a chosen time period, usually one year when applied to air quality planning. A fundamental input to the model is an estimate of emissions of air pollutants to the atmosphere at any given point in time — collectively known as an emissions inventory (EI).  The EI is broken down by source sectors according to their unique characteristics. These sectors include, for example, cars and trucks, power plants, agricultural activities, windblown dust, and … yes, fires.

Fire, in particular though, has long been a troublesome source category for several reasons:

In 2005, as part of preparing the original Regional Haze SIPs, Air Sciences assisted WRAP with building the first-of-its-kind hourly, gridded EI for wildfire, prescribed fire, agricultural burning, and rangeland burning for the Western United States. This effort involved painstakingly compiling records of individual burn events for the year 2002, applying the best available science on fuel combustion and emissions, and developing a novel technique for allocating emissions in time and in the vertical layers of the atmosphere used in the PGM.

With the advent of satellite fire detection techniques and huge advances in fire science, wildfire EIs have improved remarkably in both their resolution and emissions estimates since then. Two groups in particular, the US Forest Service AirFire team and the National Center for Atmospheric Research (NCAR), have developed wildfire EI techniques that are widely used in the research community.

The EIs used for regional haze planning differ from those described above in a key way: they are constructed as a virtual “year,” representing a multi-year period that constitutes the “representative baseline” mentioned above. Then, predicted changes in emissions are applied to the virtual year to create a future scenario for developing RPGs. For sources such as large power plants, this is relatively straightforward since they are operationally consistent, permanently located facilities. Any future changes are generally regulatory driven and may be predicted with some accuracy.

However, for a source such as wildfire, intractable questions emerge for a source sector that changes so much year-to-year. What does a “representative baseline” look like? How do we allocate emissions on a daily basis and across the landscape? What the heck will happen 10 to 20 years from now?

The WRAP grappled with this question in 2005, and Air Sciences is once again assisting with untangling this knot for the current Regional Haze SIP updates.  Stay tuned for more as we head toward the 2021 deadline!